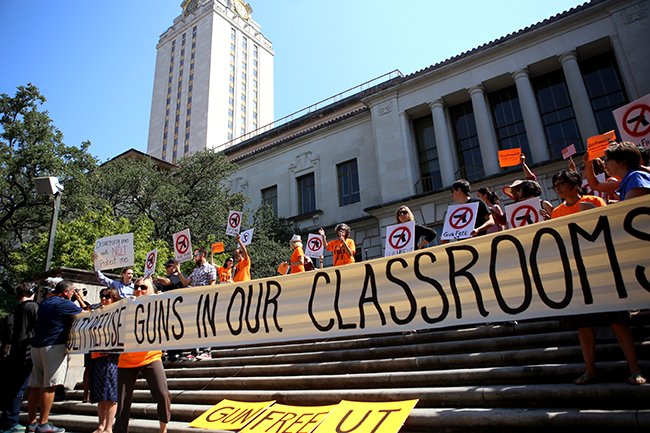 Yawn. Well, that was dull. We had another year of campus carry, and no one noticed. Yes, another year went by and legally licensed concealed carry holders were armed on post-secondary campuses across the country. We were told that drunk and drugged-up students who had a carry permit would kill each other over parking places. Critics said that faculty would be shot down for teaching unpopular courses. It never happened. It turns out that your shockingly responsible gun owner remains extraordinarily level-headed even when he comes on campus. Who knew?!

Georgia’s campus carry law took effect in July of last year. I checked, and the fresh wave of aggravated murder on campus by licensed concealed carry holders didn’t put an uptick in the budget for emergency medical services. Nothing happened, and newspaper editors across Georgia were shocked.

Campus carry was legal for junior colleges in Texas as of August of last year. It has been two years for Texas Universities and Colleges. You remember reading about all that death and destruction at post secondary schools? Texas has hundreds of technical schools, junior colleges, colleges and universities. Texas also has 1.2 million permit holders who have been on campus.. and we never noticed.

Maybe a few years isn’t enough time for us to see meaningful results. Perhaps the tidal wave of on-campus carnage simply takes years to build up. We can look at real results rather than spin fantasies. 10 states allow licensed concealed carry on campus, though some states require additional training. An additional 23 states let the governing board of each institution set their own policy. That gives us many lifetimes of experience so we should have seen something by now. Colorado and Utah had campus carry for the last 14 years.. and nothing.

You noticed which states banned concealed carry because of the constant flow of blood and news articles documenting attacks by licensed gun owners on campus? No, me neither.

It wasn’t blood spilled on campus, but ink spilled by newspapers predicting a holocaust. The only thing murdered was the truth as the news media deliberately ignored that mass-murderers choose gun-free zones.

Please remember the media’s terrible record the next time a reporter offers up his fantasy about armed america..

..and happy anniversary to campus carry.

In Trump’s America, Nothing’s Off the Table for the NRA