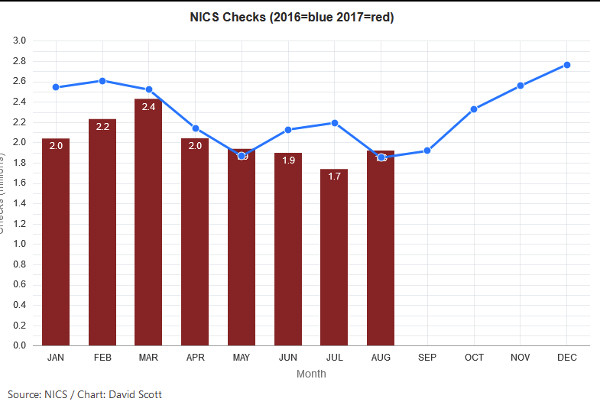 The Trump era of the National Instant Criminal Background  Check System  (NICS) checks has had eight months of high sales.  The record for NICS checks was set in 2017, with over 27 million NICS checks for the year. 2015 was the second highest year for NICS Checks with over 23 million checks done.

Firearm sales and NICS checks are having a good year. The overall NICS checks are at 92% of the all time record through August.  2017 is looking to surpass 2015 as the second highest year for number of NICS checks, since NICS started in 1999.

The high number of NICS checks reflects an expanded base of firearms owners and shooters who are buying more guns under the expectation of a prosperous Trump Presidency.

There is a high inventory of firearms for sale, and many good quality AR-15 types can be had for under $500. Ammunition prices have been slowly dropping.

The number of people with carry licenses continues to soar. There are over 16.5 million. At the time of this report, the number has likely surpassed 17 million. Carry permit holders are 5-15% of voters in many states, some crucial swing states like Pennsylvania, Michigan, Ohio, and Wisconsin. When a carry permit is obtained or renewed, another NICS check is done.

Kentucky contributes to the number of NICS checks by performing a NICS check on every Kentucky concealed carry permit holder every month. Kentucky performs nearly three million checks every year.

NICS checks are done for Federal Firearms License sales of used guns as well as new ones. The latest estimation of the ratio of NICS checks to the addition of private firearms stock is about .53 private firearms added for each NICS check done. If that ratio holds in 2017, about 8.6 million more firearms have been added to the private stock in 2017 thus far.

The expected drop in firearms sales has been minimal. Sales are at historical high levels, only a little less than the records set in 2016.  If the economy continues to pick up, 2017 could become a record year for NICS checks.