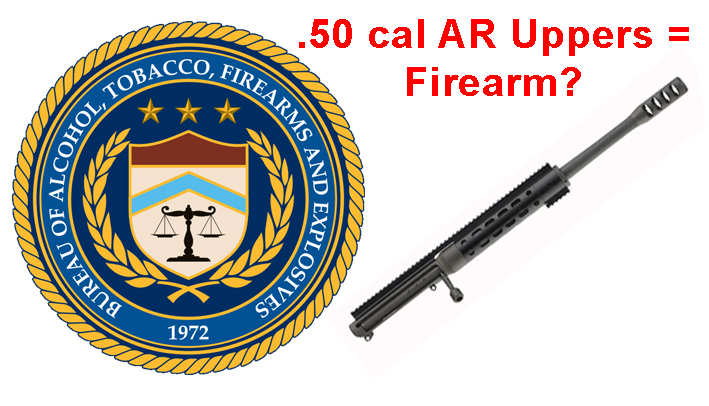 Thanks to a friend of mine for alerting me to an issue concerning Safety Harbor Firearms and other manufacturers of .50cal uppers received a letter from the ATF.  The letter claims that bolt action .50 cal AR uppers can possibly be considered firearms. I reached to Walter Keller of Safety Harbor Firearms and he agreed to share the letter with TFB. So what does this letter say? Thanks to someone submitting a request to import .50 BMG uppers, the ATF took a closer look at them. Now the letter only mentions “.50 BMG upper assemblies” in the beginning.

Near the end of the letter the ATF goes on to say they have previously determined that non-standard AR type upper receivers are considered firearms even when attached to an AR-type receivers. This is a little concerning. I wonder what previous examples are they referring to? The closest example I can think of is the FN SCAR platform. The upper receiver is the serialized portion of the firearm and it attaches to something that resembles an AR-type receiver. However the lower is not a serialized component.

Therein lies the rub. This passage does not mention anything about bolt action receivers. I can see how they could come to the conclusion that bolt action receivers are traditionally considered the firearm and therefore need to be serialized.  But now this bleeds over into AR style firearms? The passage above could then be construed that any AR upper can be considered a firearm. This is a slippery slope. If this is the case and all AR receivers are considered firearms then they will need to be transferred via 4473. And of course you can’t just order them online and have them shipped to your house.

Lets hope it does not come to this. But lets take a look at some other issues with this letter. Specifically manually operated AR uppers. Does this mean the upper receiver of guns like the Troy Pump Action Rifle are now themselves firearms? What about a straight pull BCG like the Lantac E-BCG? By installing this have you now “redesigned” the upper receiver and made a firearm? Making your own firearm in of itself is not illegal but doesn’t there need to be a component of manufacturing? Simply assembling components is not manufacturing. Otherwise 80% lowers wouldn’t be a thing

Something else that is interesting is the fact that the ATF was instructed to no longer issue open letters  just like the infamous Open Letter of 2015 regarding the redesigning of braces as stocks when shouldered. However this letter, just like SB Tactical’s ATF clarification letter earlier this year, specifically addresses Safety Harbor Firearms and only their products. So rather than issuing a generalized open letter, they are simultaneously sending letters out to similar manufacturers. I will try to reach out to Spider Firearms and see if their letter is the same as Safety Harbor’s

If the ATF presses this new interpretation and enforces it, what happens to all the manually operated AR upper assemblies out in customers hands? Could this issue bleed over to semi auto upper assemblies? Hopefully we will hear more about this matter and keep you updated.