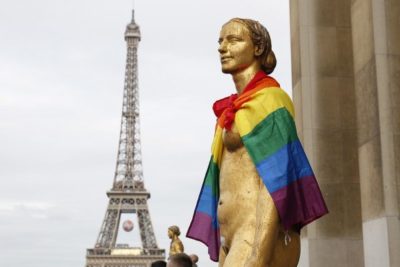 Where are the gay leaders decrying the murderous homophobia under Islam? Licking Linda Sarsour’s boots, I’m sure.

The irony is that LGBT leadership stands with adherents to this viciously homophobic ideology that calls for their slaughter.

When I created and ran ads highlighting Muslim oppression of gays under Islamic law and ran them in the gay capital of America, gay leaders and organizations attacked me. Leftism — irrational and evil.

Last year, I spoke at an LGBT event at the RNC decrying the treatment of gays under Islam, and the mainstream media attacked the event with a vengeance. This is gay leadership. They condemn me (and my colleagues) who oppose the most brutal and extreme ideology on the face of the earth, while stumping for their executioners. They were loud and proud against our ads (below). They were holding press conferences condemning me. Gay organizations in America say nothing about this, but loudly condemned my ad campaign highlighting Muslim oppression of gays under the sharia. That includes the San Francisco Board of Examiners, the Human Rights Commission, SFHRC head transgender Theresa Sparks, but most especially the enemedia. They called our ads hate and issued a resolution condemning our AFDI ad campaign (the first of its kind) against our organization for merely quoting Muslim political leaders, spiritual leaders and cultural voices in the Muslim community who call for the torture and death of gay people.

A plan to attack gay nightclubs in Paris was among a dozen terrorist plots foiled by police this year, the French interior minister has revealed.

Gérard Collomb told a National Assembly committee on Tuesday (12 September) that an attack targeting the LGBT community in the French capital had been thwarted on 22 August.
More from IBTimes UK

It could have repeated the horrific loss of life suffered at the Pulse gay nightclub in Orlando, Florida, where 49 people were killed by an Islamic State-inspired gunman.

Collomb gave no further details of the Paris plot, other than it was just one of 12 planned terrorist attacks foiled by French police and intelligence agencies since the beginning of the year.

“The threat remains high,” Collomb said. “What Daesh [Islamic State] wants is to divide the national community and create clashes between French people. This is the trap into which we must not fall.”

The plots included a plan, foiled in September, to attack a police officer with a Kalashnikov machine gun, and a planned assault on an air force training school in the southern town of
The minister said another plot targeting “a barracks, a police station or a supermarket with hostage-taking,” was averted in January.

The most recent foiled attack uncovered homemade explosives stashed in an unoccupied flat near Paris.

The parliamentary committee is scrutinising fresh anti-terror laws designed to replace the state of emergency imposed in France since Islamic State jihadists killed 130 people in the November 2015 Paris attacks.

I bought an AR-15 semi-automatic rifle in Philly in 7 minutes (philly.com)

One million Muslims Offered Free Vocational Training. Against Their Will.