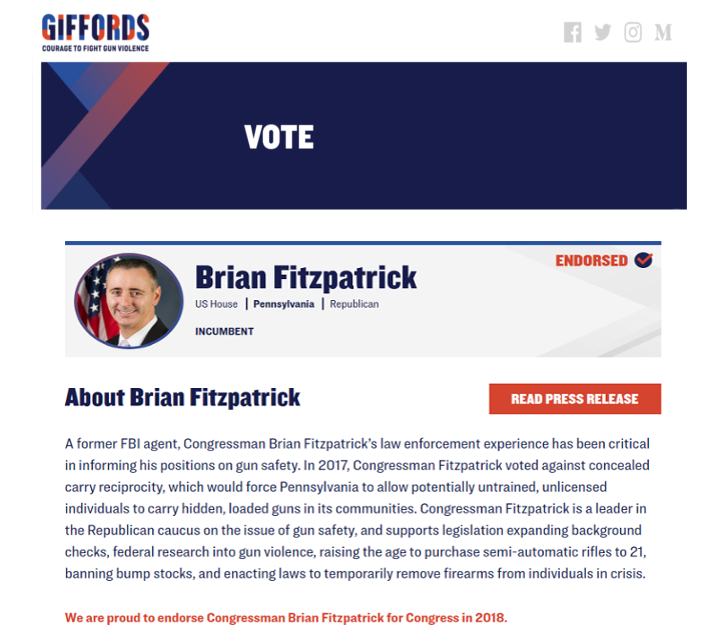 The group lauded the freshman lawmaker’s support for expanding background checks and for restricting assault weapons sales. It also praised his across-party-lines vote against a bill that would require states to recognize the validity of concealed-carry permits issued by other states—a top legislative priority for the National Rifle Association. “Congressman Fitzpatrick is a leader in the Republican caucus on the issue of gun safety,” the Giffords group wrote.

Fitzpatrick’s record hasn’t always aligned with Giffords’ portrayal of him. Here’s how the Giffords endorsement describes Fitzpatrick’s vote on the concealed carry measure:

In 2017, Congressman Fitzpatrick voted against concealed carry reciprocity, which would force Pennsylvania to allow potentially untrained, unlicensed individuals to carry hidden, loaded guns in its communities.

In the letter, dated a week after the vote, Fitzpatrick wrote that he was “firmly committed to defending the Second Amendment and the rights of gun owners” and that “fundamental to that commitment is my firm belief in the concept of reciprocity.” He added:

Our Second Amendment rights are not limited to our homes, and are not limited to our home states. It is a national constitutional right that must apply across the nation. Law-abiding citizens who have fulfilled the necessary requirements in their home state to carry a firearm for self-protection should not have their Second Amendment rights infringed by redundant regulations and bureaucracies in other states. In an increasingly polarized environment where law-abiding gun owners unfairly find themselves demonized by partisan politicians and the media, advancing reciprocity is a critical step in protecting Second Amendment rights from the whims of partisan legislators and activist judges.

Fitzpatrick then noted that he planned to work with the Senate to craft a bill with “clean reciprocity language.”

When asked, the Giffords group said that what’s most important is that he voted against the concealed carry legislation.

The Problem with Republicans, Democrats, and Elites.

Next, Abolish the Democrat Party