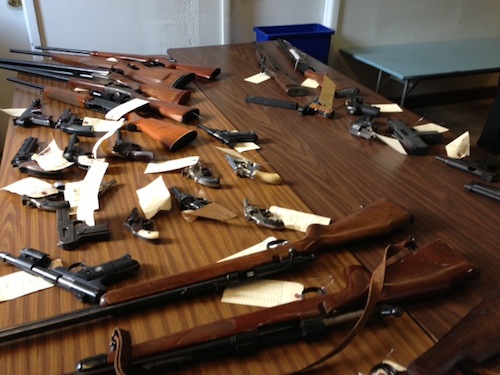 The initiative is the first time in New Jersey that a law enforcement agency has held a gun buyback funded with money raised by a non-profit foundation. The public/private partnership brings together Essex County’s top law enforcement agency – the largest and busiest in New Jersey – with the county bar association – the largest county bar association in the state – to help remove deadly weapons from the streets.

The Bar Foundation is raising funds to pay for the gun buyback. The Prosecutor’s Office, along with the New Jersey State Police, the Essex County Sheriff’s Office and the West Orange Police Department, will handle the logistics of collecting the guns, securing them and providing gun owners with cash payments.

“Every year 1,300 kids are killed by handguns. It’s the third leading cause of death of children. We know we cannot stop all gun violence or get all guns off the street, but if we can take away a potential source that would be a great accomplishment. It makes our job easier,’’ said Acting Prosecutor Laurino.

“If we can keep a gun that’s just lying around the house out of the hands of a felon or a child who might commit suicide or prevent an accidental shooting we’ve made a difference,’’ Acting Prosecutor Laurino added.

Brothers Serve Together in Security Forces Squadron : Face of Defense