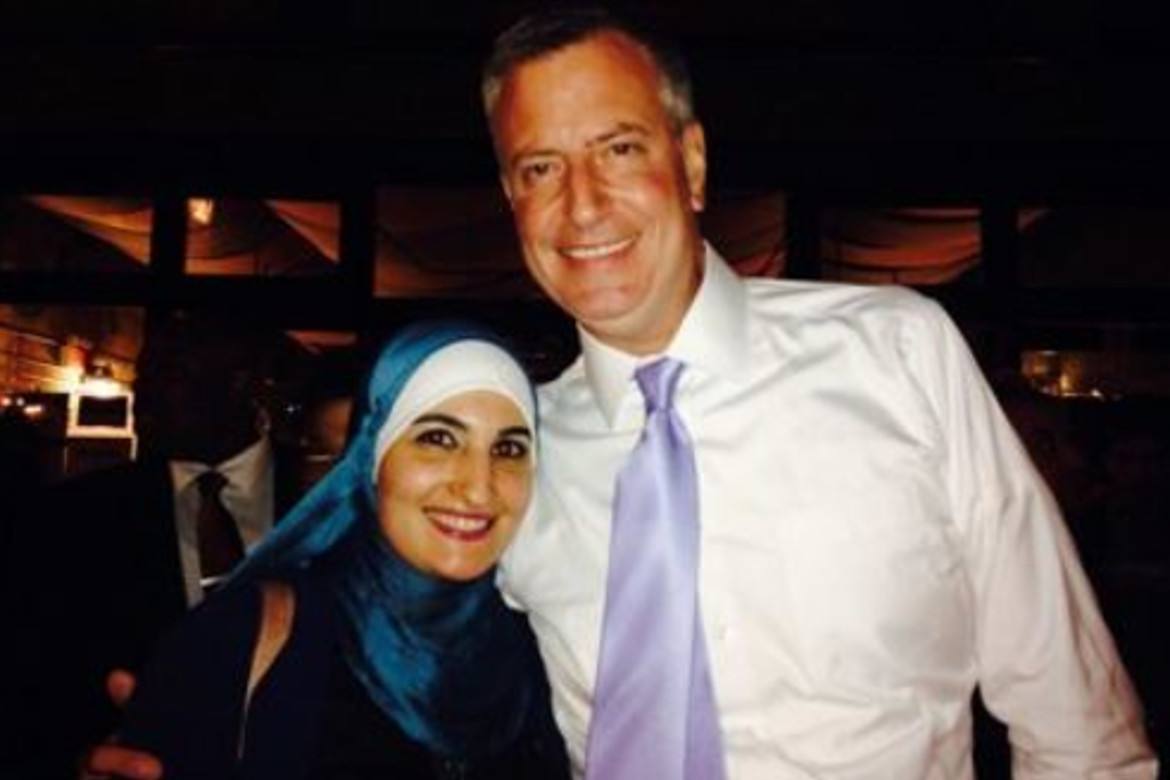 New York’s new grant program likely reflects the increasing influence that terror-tied CAIR has in City Hall. Worth noting is that CAIR-NY President Zead Ramadan is a significant donor to New York politicians, including Mayor Bill DeBlasio. These low lives so easily bought.

We have long known the strategy of the terrorist strategy of Muslim Brotherhood groups (ie CAIR, ISNA, MSA, et al) for infiltration and stealth overthrow of American law, but it is the ease in which they achieved  unimaginable success in a post 9/11 America that is astonishing — the level of access, infiltration and influence in the highest level of government and media.

During the course of the largest terrorist funding trial in our nations history, the Holy Land Foundation trial, many incriminating documents were  entered into evidence. Perhaps the most significant of these was “An Explanatory  Memorandum on the General Strategic Goal for the Group  in North America,” employing US Muslim Brotherhood ….

groups that could help convince Muslims “that their work in America   is a kind of grand Jihad in eliminating and destroying the Western civilization from within and’sabotaging’ its miserable house by their hands … so that … Allah’s religion is made victorious over all other religions.”

These groups (CAIR, ISNA, NAIT, et al) were  identified in the US government’s case against Islamic terror funding “charities”  as”participants in a network of U.S.-based organizations affiliated with the designated foreign terrorist organization.”

At the end of the document, the memorandum lists those Muslim Brotherhood organizations that – if  they all worked together –
could help accomplish this grand objective. These organizations includeISNA, NAIT, the Occupied Land Fund (OL  F ) (the former name of the HolyLand Foundation), the Islamic Association for Palestine (IAP), the United Association for Studies and Research (UASR), and others. Id.

ISNAand NAIT,  in fact, shared more with HLF than just a parent organization. They were intimately connected with the HLF and its
assigned task of providing financial support to HAMAS. Shortly after HAMAS was founded in 1987, as an outgrowth of the Muslim Brotherhood, Govt. Exh. 21-61, the International Muslim Brotherhood ordered the Muslim Brotherhood chapters throughout the world to create Palestine
Committees, whose job it was to support HAMAS with “media, money and men.” Govt. Exh. 3-15.

Related: Why It Should Always Be Called ‘Hamas-CAIR’ Pamela Geller, American Thinker

Worse, it seems that ICNA, in particular, plans to use the money not for civic improvement but for religious proselytizing.

The grant announcement was made at ICNA’s headquarters in Jamaica, Queens, after the Jumu’ah prayer service. Present were the young speaker of the city council, Corey Johnson, and Councilman Daneek Miller, the sole Muslim member of the council.

Councilman Miller is no stranger to ICNA; his campaign website prominently features a photo of him speaking at the ICNA mosque.

ICNA was established in 1971, ostensibly as a “non-ethnic, non-sectarian” grassroots organization, with the aim of seeking the “establishment of the Islamic system of life as spelled out in the Qur’an.”

In fact, it functions as the American arm of the Pakistani Islamist group Jamaat e-Islami (JI). Indeed, ICNA’s international charity, Helping Hand for Relief and Development (HHRD), works closely with JI in Pakistan. Worse, in 2017 HHRD openly worked with the “political” wing of the murderous terror group Lashkar-e-Taiba.

JI has long been linked to political violence, notably during the Bangladeshi war of independence in 1947 — during which Pakistan employed JI groups as death squads. ICNA’s former Vice President Ashraf Uzzaman Khan was convicted in absentia by Bangladesh in 2013 of being part of the Pakistan-backed Al-Badr death squad, and personally murdering 7 professors and intellectuals.

The radical literature of JI’s founder, Sayyid Abul ‘Ala Maududi, is repeatedly emphasized in the 2010 ICNA members’ handbook, which explicitly discusses ICNA’s true goal of setting up a worldwide Islamic state via proselytizing campaigns.

To pay for prayer services with a government grant is a blatant violation of constitutional law, and all the more so when it is for a proselytizing purpose.

MAS, meanwhile, has been identified in courtroom testimony as the main U.S. front group for the Muslim Brotherhood. And CAIR was founded by the leaders of the Islamic Association for Palestine, a front group for Hamas; following the 2007 Holy Land Foundation trial, which featured strong evidence that CAIR was still coordinating with Hamas, the FBI cut off all contact with CAIR.

CAIR’s New York chapter has been particularly open in its support for terrorism. Former executive director Cyrus McGoldrick has a history of inflammatory rhetoric, including retweeting a statement from Hamas leader Khaled Meshal mocking those who object to its rocket attacks on civilians, and other tweets quoting Hamas slogans.

And CAIR-NY board member Lamis Deek publicly praised a Palestinian drive-by murderer and called him a “martyr,” and bluntly stated that the “Zionist Israeli government does not have the right to exist.” She was even more explicit in 2009: “[I]n choosing Hamas, what [the Palestinian people] chose was one united Palestinian state on all of the 1948 territories from the north to the very south.… [And] we support their right to liberation from violent colonialism.”

New York’s new grant program likely reflects the increasing influence that CAIR has in City Hall. Worth noting is that CAIR-NY President Zead Ramadan is a significant donor to New York politicians, including Mayor Bill DeBlasio. And Faiza Ali, the director of Speaker Johnson’s office, was formerly the community affairs director of CAIR-NY (as well as a civic engagement director for the Arab American Association of New York, which also received grant money).

Speaker Johnson, a councilman from Manhattan, also owes his current position to the support of the Queens and Bronx Democratic machine (to which he has directed considerable pork); this may help to explain his willingness to associate himself with Queens-based groups like ICNA.

It is shocking that an effort to strengthen local Muslim communities is being exploited to fund groups linked to extremism. Sleazy pay-for-play politics do not excuse such reckless policy, nor do they excuse violating the Constitution by funding religious services.

If New Yorkers want to help Muslim communities, giving money to CAIR, ICNA and MAS should be the last thing they do.

Dr. Oren Litwin is a Research Fellow at Islamist Watch, a project of the Middle East Forum.