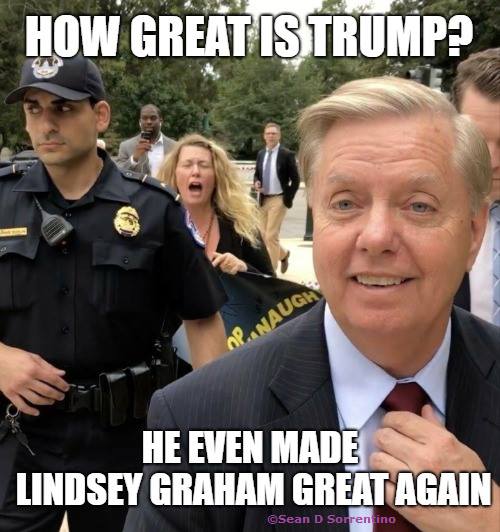 Why did even establishment Republicans like Lindsey Graham suddenly got religion? It’s because of who the Left is attacking. Brett Kavanaugh is about as middle of the road establishment Republican guy as you can find. Sure, he’s great on guns, and we’re counting on that, but he’s not some wild-eyed anarchist bent on ripping down the apparatus of the Deep State. He’s a guy who has worked inside the Beltway for most of his adult life…

Kavanaugh went to Yale Law, which makes him by definition, an insider. He clerked in the 3rd Circuit, then went on to clerk for Alex Kozinski in the 9th. He earned a fellowship with Ken Starr, the Solicitor General of the US, moved on to clerk for US Supreme Court Justice Anthony Kennedy. Then he ended up back with Ken Starr, in the Office of Independent Council. Starr must have liked him because he had him come back as an Associate Counselor, and in that role was the principal author of the Starr Report, which is what got Clinton impeached. (as far as I’m concerned, this is Kavanaugh’s greatest sin according to the Left) He was pro bono counsel to relatives of Elian Gonzalez, trying to keep Clinton from kicking the poor kid out the US. He also was on W’s legal team on the Florida recount, and was hired by Alberto Gonzales, the White House Counsel.

I dare you to read all of that and not draw the obvious conclusion. He’s the insider’s insider. He’s so much a part of the establishment that even W was making calls to make sure this Trump appointee got the votes.

So why did Lindsey Graham suddenly get Woke? Trump could have appointed anyone. During the Gorsuch nomination the filibuster was finally destroyed for Supreme Court nominations. He could have nominated anyone and trusted that all he needed was 51 votes for confirmation. But instead, he nominated the insider’s insider. And the Left does what the Left always seems to do these days. They channeled their inner Otter and screamed

“I think we have to go all out. I think that this situation absolutely requires a really futile and stupid gesture be done on somebody’s part!”

And they decided to go all out on a guy that even Lindsey Grahamnesty considers a perfectly normal ordinary decent guy. The Left went nuclear on a boring ass dude who is known to his neighbors as a “carpool dad,” shuttling students to and from practices, games, and other activities. You couldn’t get more Dad Life than this guy. They attacked Mr. Everyman. The Left didn’t attack a wild-eyed lunatic. They attacked a boring ass dude in a minivan who happened to have worked with ALL the Beltway insiders and has apparently been friends with Graham for 20 years.

This is either the greatest stroke of luck Trump has ever had, or it’s evidence of Trump playing 3D freaking chess against people confused by Chutes and Ladders. The Left absolutely can’t help themselves. They attacked a guy who even had the support of milquetoasts like Grahamnesty. They made it clear to even the most myopic of NeverTrumpers that they were bent on absolute destruction rather than a simple partisan advantage. They did the impossible. They put the Rhino wing of the party in Trump’s pocket.

Here’s my election prediction. Republicans pick up seats in BOTH the House and Senate. Why? Because the Left had to go and make a really stupid and futile gesture. And Trump led them to it by their collective noses. He even made Lindsey Graham great again.

What Justice Gorsuch Might Mean for the Second Amendment