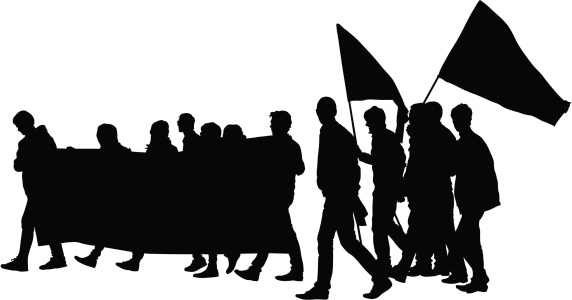 Americans have a long history of activism.

In fact, this country was founded by men and women who took to the streets to protest injustices heaped upon them by a foreign king. Of course when that failed they relied upon the force of arms.

Once the colonial yoke was finally cast off, our founding fathers so venerated the right to assemble and to protest that they ensconced this right in the First Amendment.

Throughout our history it has been the activist that has created positive change in America.

I shudder to think of what the state of civil rights would be today were it not for Dr. Martin Luther King, Jr. and his incredibly brave congregants — men, women and teens who marched quietly into lines of lawmen armed with dogs, fire hoses, billy clubs and guns — knowing they could be beaten and bit.

Compare that to today’s activists , David Hogg and his followers, who have harnessed social media as the main stage for their protests. There’s no riot cops with raised clubs online, just a few trolls.

I need to point out that I have never written anything about Mr. Hogg or his associates — not one column inch — for several reasons. First, he and his group are children. For me, that’s an important consideration. Secondly, they’re still grieving. That too carries a lot of weight, and I have always supported their right to protest, just not the content of their messages. But things changed this weekend. Their protests took a very bad moral turn.

Mr. Hogg and about 100 followers staged a protest outside of Smith & Wesson’s factory in Massachusetts.

He demanded two things: That Smith & Wesson cease production of firearms that contravene Massachusetts’ 2004 “Assault Weapon” ban, and that the gunmaker fork over $5 million — every single year — for so called  “gun violence prevention research.”

If Smith & Wesson fails to turn over the cash, Mr. Hogg said: “We will destroy you by using the two things you fear most. Love and economics

This is not activism — threatening to destroy a business if it doesn’t pay $5 million per year.

Morally, how is this any different than a mafia don sending two foot soldiers to a business owner and threatening to torch his place if he doesn’t pay protection money.

In my humble opinion, this millennial McCarthyite with his “subversives list” has crossed into a realm that is not protected speech. This is not what the founders had in mind.

Who’s next, I wonder. What other businesses will be targeted for termination?

This is no longer a protest. This is McCarthyism run amok.

I hope that happens soon.

Nathaniel Rateliff And Other Celebrities Fall Victim To Misinformation