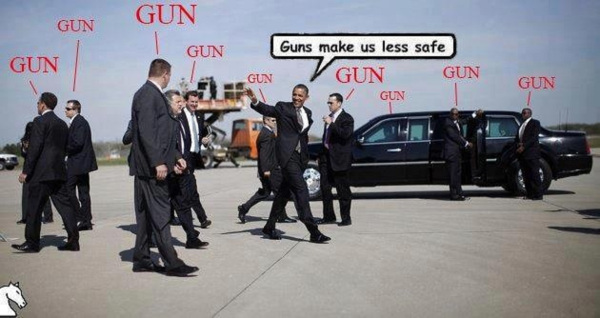 Fred Hiatt wrote about a “gun free society”. He tried to call it “gun prohibition”. He wrapped his anti-rights bigotry in terms of a “mass buyback”. Fred hopes that President Barack Obama will issue executive orders and make all gun owners into criminals.. but leave the police and political protective services with guns. Fred wants guns to protect Obama’s kids, but not to protect yours.

I immediately noticed Fred’s distortion about our rate of violence. Fire and water kill more children than guns. Fred ignored that most of our gun injuries are suicide. Fred ignored the fact that the criminals who use a gun are almost always part of a drug gang in a failed Democrat city, and that 70 percent of our counties won’t have a single murder this year. He ignored that the rate of violent crime has fallen while gun ownership has soared.

Let’s take Fred’s ideas to their logical conclusion and look at gun confiscation.

First, let me tell you about Fred Hiatt. He edits the Washington Post editorial page. He has lived in the seats of political power. He worked at the Tokyo, Moscow and at the Washington, DC offices for the Post. Fred says he doesn’t like guns, but he isn’t telling us the whole truth. Fred likes guns a lot. I’d say he actually has a serious gun fetish.

Fred Haitt deeply loves guns as long as they are guns he controls… or thinks he controls. He loves gun confiscation. That isn’t a surprise. Democrats have been disarming minorities since the days of the Ku Klux Klan. Today, Fred wants the police to come to our houses and take our guns. Fred wants armed and armored SWAT cops to break down doors in some 80 million American homes. Believe me, the cops won’t bring flowers when they arrive at our door. The cops will have to bring lots and lots of Fred’s favorite guns to get the job done. Fred Haitt thinks it is acceptable if some of us get killed in these dangerous raids. It is probably more than acceptable; Fred wants some of us to be murdered by the police as an example for others. There is no moral conflict for Fred, since he thinks gun owners are less than human. It is desirable if some of our children get killed too… because our children are guilty by association.

Fascists have often gone to war in the name of “peace”. Today, Fred blames gun owners for the necessity of imposing a police state and using violence to achieve his political ends. Fred is interested in what the state needs, and maybe mass public violence is necessary for the state to do what the Democrat political elites want done. Fred is not interested in respecting human rights so we can live together peacefully. Again, there is no moral conflict since gun owners are less than human.

The state grows and our freedoms shrink. Fred hates it that some citizens have guns and might resist as the state tells us exactly how to live.

Fred loves guns when the guns are controlled by his political palls. He hates the idea that the US population owns seven guns for every eight citizens. Guns matter, and Fred hates our independence of thought and action. Disarmed subjects have no choice but to obey a totalitarian government. The world of an all powerful state is certainly neat and clean and tidy… for those in power… and for their supporters at the Washington Post.

Fred and other fascists always have a rationale why our freedoms needs to shrink and the power of their political elites need to grow. According to Fred, a gun-free society would be peaceful. You understand that Fred doesn’t give us examples where that actually happened once guns were banned. Fred doesn’t tell us about the lethally violent nations where guns are outlawed. He wants us to ignore the violent “gun-free paradise” of Mexico, Venezuela and Jamaica. Fred didn’t tell you that even Ireland and Russia are more violent than the United States. Instead, Fred trots out his focus-group tested platitude that “gun prohibition saves lives”. Some people actually believe it.

Let’s look at the real world and see what happens once honorable citizens are disarmed. Criminals never registered their guns in the first place, so criminals won’t be disarmed by the police during Fred’s national gun grab. You and I will stay home at night behind locked doors because armed criminals will again rule the night. The weak will again fear the strong. The few will again fear the many. The old will again fear the young. That vulnerability and fear isn’t a fault. For the fascist, that fear is a cherished feature.


Everyone will again depend on the state for their safety. In Fred’s world, the police are now first responders, rather than second responders. Too bad for us if the state security forces look the other way and something bad happens to us. We are simply sacrificed to the criminal class once our loyalty to the state is in doubt. Fred, the nasty fascist, wants us to serve as an example for others.

Fred didn’t tell you about our recent political history of attempted gun control. He ignored that some US states have already called for mandatory firearms registration… and failed. Fred’s paper, the Washington Post, ignored this news, but only four percent of the gun owners complied and registered their firearms. The state government did not press the issue… and for very good reasons. The governor realized that most law enforcement officers didn’t register their personal guns either.

That surprised you, didn’t it, Fred. It turns out that police officers are not fascists. Cops support limited government and the rule of law.

Let’s say I’m wrong, and ask how 300 thousand law enforcement officers are going to disarm 100 million gun owners. It is sad to imagine, but some of the police and Democrat politicians could be injured in these raids. Where will the police and Democrat politicians go for medical help once the doctor hears that his brother has been arrested? Where will the Sheriff’s deputy and his family buy groceries once the deputy has killed the brother of the store clerk? Where will the police officer’s children go to school once the teacher’s child was murdered in a raid at the wrong address? I don’t know, and Fred Haitt doesn’t tell us.

Where will the sheriff and the mayor live with their families once they have broken the bonds of honor that bind honest citizens to the government they elect? Maybe the Washington Post won’t report those stories so we’ll never hear about them from the state controlled press.

In my city, we put thousands of citizens on the street to honor a murdered policeman. I like honorable men and women, in uniform or out. That would change once cops serve politicians rather than citizens. Where will the cops live once they start kicking in doors? Fred Hiatt never says.

Fred is simply an anti-gun bigot wrapping his gun fetish in erudite language. Let’s call the nasty fascist what he really is.


Share if you want the media to be honest about the gun-control issue.
Original link