Study cures ignorance, but it is the comforting lies we cling to that cause us so much trouble. Where did we learn the foolish falsehoods we hear about civilian gun ownership? What makes these lies so attractive and so dangerous? Let’s look at the popular myths of disarmament.

You don’t need to defend yourself. You should just call the police and let them protect you. Yes, I’ve had people say this to my face. I’ve learned not to argue with facts about court decisions. The people who say this know it is a lie, but they are clinging to the lie for a reason. I learned to ask them this question-

“You’re at the park with a child you care for. An adult comes up and grabs your child off the swing and starts to drag her toward his car. Are you’re telling me that we should run to the phone rather than use a defensive tool to protect our child?”

It is a shocking question. The ideologue looks me in the eye and says we should sacrifice the child for the cause of gun-control. In contrast, if the questioner is an honest person, then they look down and say we should protect the child. I find it inspiring that people will still rush to the aid of an innocent child even if they are too lazy to defend themselves. Now, we can talk about the tools they need to be effective defenders.

You shouldn’t own a gun because a criminal is more likely to take it from you than you are to use the gun in self-defense. You’re more likely to be violently attacked if there is a gun in your home. I love these particular myths because they contain a twisted speck of truth. Too many gun owners think that the gun will stop a criminal. Some of these gun owners don’t load their guns because they think the gun will work like a magic charm to stop an attack.

A brilliant doctor explained that situation this way. Criminals survive as predators because they become experts at reading their prey. Your determination to stop the attack is what stops the predator. Your gun is merely the tool you use to express your resolve.

The doctor is right. Before you own a gun, you have to ask yourself if you could shoot someone if your family faced a lethal threat.

The other thing I like about this question is that it hides so much. Yes, you’re more likely to be hurt during an attack if there is a gun in your home..particularly when you include the attacker’s gun. There is that hidden grain of truth: armed criminals are more violent than unarmed burglars.

Which came first, crime or honest citizens wanting a gun for self-defense? People who live in high-crime areas are more likely to want tools to protect themselves from the violence around them. The fact that honest people own guns didn’t cause crime, but was a reaction to it. Also, as I study self-defense each week, I’ve found that it is more common for the criminal to be disarmed than the intended victim.

We should outlaw guns because guns cause crime. The world would be so much nicer if this were true. I wish we could control human behavior by making rules. Unfortunately, criminals don’t obey our laws. Criminals use any tool available to control their victims. Criminals bring friends so they can outnumber us. Criminals use knives so they can overpower us. They buy their guns illegally so gun-control laws don’t disarm criminals.

A woman won’t use a gun to stop an assault. She is better off without it. She should use pepper spray or a rape whistle for protection. I’ve had friends who were sexually assaulted by an armed rapist. They had pepper spray while their attacker had a knife. They won’t let that happen again. Today, they go armed. I looked at the statistics, and a vanishingly small number of sexual attacks are completed if the victim is armed. 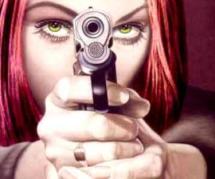 The rapist is culpable for the assault. The victim is responsible for having the tools they needed to defend themselves.

We have mass murder because it is so easy to get an assault weapon. There was a time in our history when you could buy a machine gun by mail-order.. and we didn’t see attacks on our schools and churches. Society changed in the last 85 years. Our media changed too! Today, mass murderers get hundreds of millions of dollars of publicity when they kill. Do you think that leads to more murders or less? Many mass murderers say they killed so we would know their name.

If you think guns are easy to get, then I suggest you go to a gun store and try to buy one. Better yet, try to buy a machine gun. Write up your experience if you think it was too easy and I’ll publish it here.

Gun-control works in other countries so we should do it too. Don’t confuse the news with the facts. The news media is wildly biased..for a reason. A murder in your town is news. A murder on the other side of the world won’t be covered in your local paper. That does not mean that there are no murders overseas and that the foreign country is safe. In fact, the US is about average when it comes to murder with a firearm. Many countries with draconian gun-control prohibitions are more violent than the US.

It is comforting to pretend that words on paper will keep us safe. We have not seen that work in other countries.. or here in the US.

Adults have the responsibility to protect themselves, but we would rather pretend that society is safe and that ignoring our responsibility is free. We ignore hard facts so we can live soft lives without concern. We want someone to blame when we’re attacked..so we blame guns and society.

The fault is not in society, but in ourselves. It takes a person with strong character to set aside reassuring falsehoods and take comfort in the truth. Please be that person. Protect yourself and those you love.