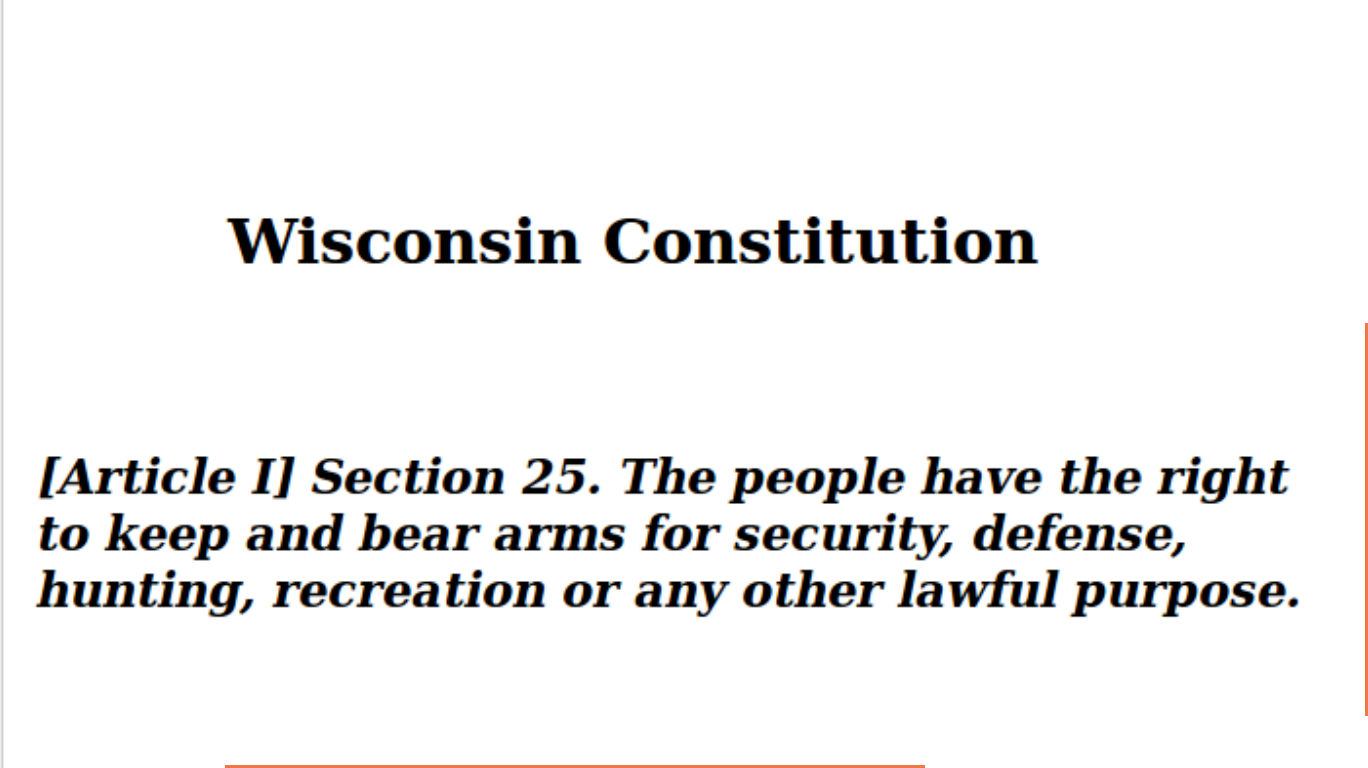 On 19 September, the Senate Judiciary Committee passed the Wisconsin Constitutional Carry bill with a 3-2 vote. The vote was along party lines. Republican Senators Wanggaard, Testin, and Stroebel voted to bring Wisconsin statutes in line with the Wisconsin Constitution. Long time anti-Second Amendment Senators Risser and Taylor, Democrats, voted against the reform. Risser is from Madison. Taylor is from Milwaukee. From wrn.com:

A bill that would allow Wisconsin residents to carry concealed weapons without a permit has advanced out of a state Senate committee.

The legislation makes a number of changes to the state’s concealed carry law, which include allowing anyone who can legally own a gun to carry a concealed weapon in most places. It would also allow permit holders to have a gun on school grounds, if they are within a few feet of their vehicle. Felons, who currently are not allowed to have guns in Wisconsin, could also possess muzzleloaders and firearms made before 1898.

State Senator Van Wanggaard (R-Racine) chairs the Senate Judiciary Committee, which approved the bill Tuesday on a 3-2 vote. He noted the state already has an open carry law, and he believes extending that right to concealed carry would create “less tension” in situations where a person has a weapon on them. “I think this is good policy,” he said.

In 1998, the people of Wisconsin voted for Constitutional Carry in a state referendum amending the state constitution. The amendment, which created Article I, Section 25, is very clear. It received 74% of the vote. From Article I Section 25:

The people have the right to keep and bear arms for security, defense, hunting, recreation or any other lawful purpose.

In 2003, leftist judges on the Wisconsin Supreme Court moved to gut the amendment of any meaning.  Judge Prosser argued that the right is neither fundamental, nor of an individual nature.

In that decision, the justices cited several other states that had effectively neutered their own state constitutions’ right to arms. The Court refused to apply the words of Wisconsin’s new amendment. The 2003 case was an example of an “everyone else has neutered amendments we do not like” argument.

The Wisconsin electorate reacted to the Judicial activism. Since 2003, Wisconsin has elected a strong, conservative Governor, Scott Walker. Wisconsin elected strong majorities of Republicans in both houses. The electorate has replaced a majority leftist Supreme Court with a 5-2 majority of judges who uphold the Constitution.  In a recent case, the Supreme Court ruled the City of Madison could have a rule that forbade the carry of weapons on it bus system. During that case, three different Supreme Court justices seemed ready and willing to enforce Article I, Section 25, and the Second Amendment. One of the remaining two leftists on the Supreme Court, Justice Ann Walsh Bradley, J. , strongly suggested that is what is going on. She writes:

As a harbinger of things to come, the majority begins its analysis not with the statute to be examined, but with a discussion of the Second Amendment of the United States Constitution, examining the constitutional right to bear arms. Majority op.,¶¶8-12.

The Constitutional Carry bill, SB 169 and its companion in the Assembly, AB247, will bring the Wisconsin statutes in compliance with the Wisconsin State Constitution and with the Second Amendment. No fee would be required to carry a firearm either loaded or concealed. That was the state of the nation when the Second Amendment was ratified on December 15, 1781.  Constitutional Carry is only a small additional step for Wisconsin. Wisconsin does not require a permit to carry firearms openly. No permit is required to carry knives openly or concealed.

The Wisconsin permit system is one of the most reasonable in the United States, with issuance of the permit required when a person is not prohibited from carrying arms, passes any of a wide variety of courses of instruction, and pays the $40 fee. The current permit is good for five years and can be renewed over the Internets. No picture or fingerprints are required.

The bill contains a number of other reasonable reforms, such as allowing non-residents to obtain a Wisconsin carry permit.  Here are a few others.

Two separate sources have told me the legislature has the votes to pass the reform, and that Governor Scott Walker will sign the measure. We should know if the sources are correct in a couple of months.

Gun-Control Fails in California..and We All Lose