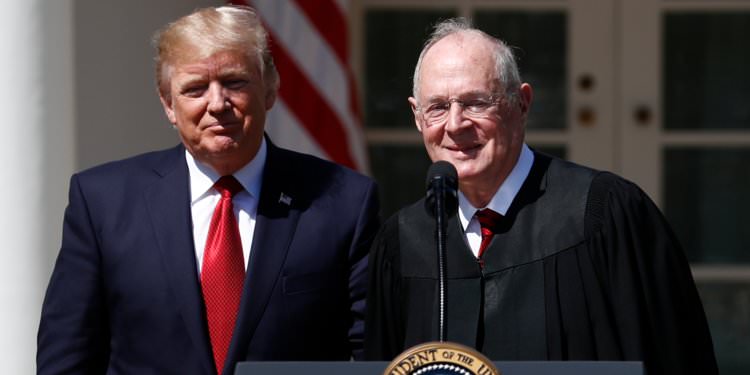 On Wednesday, Associate U.S. Supreme Court Justice Anthony Kennedy announced that he is retiring effective July 31. The move signals the end of Kennedy’s 30-year career on the nation’s highest court, which bore witness to its most important decisions concerning the Second Amendment. It also creates the opportunity for President Trump to appoint a replacement who will help reinvigorate the stalled progress in Second Amendment jurisprudence.

Kennedy was also at times critical of federal overreach into state matters concerning firearms regulation. In the 1995 case United States v. Lopez, Kennedy joined a 5-4 majority to strike down the Gun Free School Zones Act of 1990, which the court determined went beyond the federal government’s authority to regulate interstate commerce. In the 1997 case Printz v. United States, Kennedy joined another 5-4 majority in determining that the federal government, through the Brady Handgun Violence Prevention Act, could not force state and local law enforcement officers to conduct background checks on handgun buyers.

Since McDonald, however, the Supreme Court has shown a reluctance to defend the Second Amendment as a right commensurate with other portions of the Bill of Rights. In 2015, Justice Clarence Thomas was joined by Justice Antonin Scalia in a dissent from the denial of certiorari in Friedman v. Highland Park, a case which concerned a ban on commonly-owned semi-automatic firearms. Thomas noted, “The Court’s refusal to review a decision that flouts two of our Second Amendment precedents stands in marked contrast to the Court’s willingness to summarily reverse courts that disregard our other constitutional decisions.”

Earlier this year, Thomas further expressed his frustration on this matter in a dissent from the denial of certiorari in Silvester v. Becerra, a case which challenged California’s 10-day firearms waiting period. Thomas explained, “If a lower court treated another right so cavalierly, I have little doubt that this Court would intervene. But as evidenced by our continued inaction in this area, the Second Amendment is a disfavored right in this Court.” The justice went on to lament that “[t]he right to keep and bear arms is apparently this Court’s constitutional orphan.”

With Kennedy’s retirement, President Donald Trump now has his second opportunity to shape the Supreme Court.  There is every reason to believe that he will choose a nominee that will diligently work to uphold Americans’ Second Amendment freedoms.

The president’s previous choice, Justice Neil Gorsuch, wasted no time in declaring his support for the right to keep and bear arms. Less than three months after taking office, Gorsuch joined Thomas in a dissent from the denial of certiorari in Peruta v. California, a challenge to the state’s may-issue carry regime.

Moreover, defending the Second Amendment continues to be a focal point of the president’s agenda. On the same day as Kennedy’s retirement announcement, President Trump hosted a group of 150 student leaders at the Face-to-Face With Our Future event. During his remarks to the group, the president stated, “You have to believe in protecting the entire Constitution, as written, including the right to free speech and the right to keep and bear arms. Second Amendment.”

Even with a Republican majority in the Senate, gun rights supporters will need to once again become engaged in order to ensure that a pro-Second Amendment nominee reaches the bench. The president’s opponents are already calling on their allies in the Senate to oppose the unnamed Trump nominee by any and all means. Mere hours after Kennedy’s announcement, long-time MSNBC political commentator Chris Matthews likened the coming nomination clash to the Spanish Civil War.

That sort of hysteria aside, the stakes are indeed high. Justices Ruth Bader Ginsburg, Stephen Breyer, and Sonia Sotomayor have all made clear their view that the Second Amendment does not protect an individual right. And Justice Elena Kagan undoubtedly agrees with them.  At a 2009 lecture to the Harvard Club of Washington, D.C., Ginsburg went so far as to call for Heller to be overruled, telling the audience that the dissenting opinion in the case “appeal[ed] to the intelligence of a future day.” In 2016, Ginsburg reiterated her position, calling Heller “a very bad decision.”

In the coming weeks and months NRA-ILA will keep gun rights supporters up to date with the latest news regarding the nomination process and with information on what they can do to help secure a pro-Second Amendment Supreme Court that will protect the right to keep and bear arms for decades to come.  Stay tuned.

Hockey Puck Fantasy Versus Bleeding Reality to Defend Our Schools